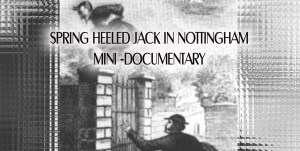 Spring Heeled Jack in Nottingham. The infamous character usually attributed to the streets of Queen Victorias London. With claimed abilities such as jumping from the street floors to the roofs of buildings, jumping from building to building. Dropping gas into crowds. Frequently eluding police and pursuers. Some describe him as having a gentlemany appearance with a top hat, other account him as having olivegreen skin and metallic claws. Blue flames coming from his mouth. Spring Heeled Jack was never caught and speculative folklore took grip taking his name into infamy.
Also made himself known around the country notably in Liverpool and even witnesses claimed a figure if similar appearance and abilities across the globe too. Relatively unknown is Spring Heeled Jacks detour into North Nottingham. Namely the ancient village of Linby.

I came across this story and information whilst researching other strange reports and accounts around the area in 2007. In fact we found so many significantly interesting stories in the geograpghic area of Hucknall, Papplewick and Linby. Covering history. myths, ghosts and urban legends. We took to hosting guided walks opening the public up to the stories we uncovered. With positive press from Hucknalls Dispatch and Nottinghams Evening Post. The revelation of Spring Heeled Jack being a particular highlight.

We filmed on location in Linby at Quarry Lane and in Linby village.

Took twice to do so. First day of filming when came to editing despite being a great bright day, the microphone caught too much of the wind resulting is distorted audio so had to return to re-film two days later. That second day resulting in the beautiful weather and conditions.

This is what we learned. Short documentary “Spring Heeled Jack In Nottingham”
We hope you enjoy.