Home > Video > Magic in my pocket: The Black Mirror 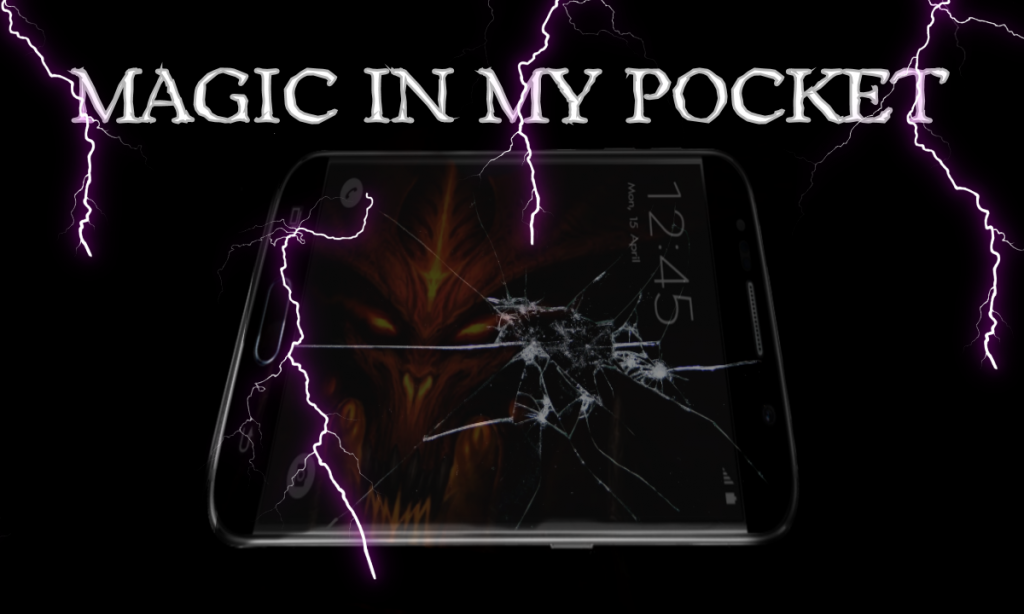 Magic in your pocket: The black mirror

Do you believe in magic?

A bit of an unfair question really for which I must apologize, when I say magic, and when you think magic it is likely we have different perspectives.

I have an interest in etymology the origin and ancestry of words. Magic is a challenging word, it has tied to all manner of things. I will however generalize, magic tricks, illusions, sleight of hand, knowing therefore it is misdirection in the hands of a skillful practitioner.

Magi, a priesthood of knowledge, in the middle east. Owners of hidden knowledge passed on to and through schools who teach such knowledge. I’ve spoken in the past of physical magic, physical magic we see in movies as the depiction of magic – creation of fireballs, manipulation of nature, lightning and the earth. Blasts of force. Summoning of creatures. Magic is also, associated with mental intent. The power of incantations and of words which create a desired outcome.

Manipulating the universe to our very will, with consequences to follow as the universe snaps back to its ordinary flow. Which is where magic ties into the paranormal. Abilities under the ‘magic’ umbrella claimed by many, such as telekinesis, telepathy, knowledge gained from afar from a source, communication with supernatural entities those not visible to others present. Magic is also bringing something into reality, from one state into another. If you’re a song-writer, you hum a tune you go home add some lyrics, add some music, you’ve created a song. You have created magic. When a musician plays music, they often experience euphoria with a state of zen.

As esoteric researcher popular writer Thomas Sheridan said to a large audience at AV7 conference just a few months ago, where i was in attendance. Thomas gave a description of  black magic, where you take these intentions, these attributes and you direct them on to another person against their will! An example from stage magic to the political stage, they cannot force us to a do anything, unless we have to give them permission. For the trick to work, the magician will often ask ‘Can i have a volunteer from the audience.’ A stage magician always has the distraction for everyone else to be watching, ahh that’s right – the sexy girl. He looks at the audience knows most are spellbound – ‘Can i have a volunteer?’ Somebody will always raise their hand, because they want to get close to the sexy girl – maybe work their primitive rustic charm. They are already highly suggestible as they are on the stage, next to the girl. She gives him the kiss, when hes come up. He has been bewitched. The magician casts his instructions, maybe hypnotized and has the volunteer barking like a dog – jumping around like a kangaroo. No violation or against their will occurred, the magician asked for a volunteer. Really important. In esoteric lore material there is a term; ‘Willingly came as a fool,’ Sleight of hand, the deception, control of perception, gaslighting – to achieve a desired result.

Magic in your pocket.

Magic in your pocket, what does that mean?

There’s a practise in ritual magic, known as scrying. Where the practitioner would take an obsidian mirror or a dark coloured usually black bowl of water taking interpretations and visions from the lines of reflected light, when you scry, you are connecting – some claim to see other side, communication with entities of knowledge – others use a phrase much darker – that the connection is to demons. This belief holds that demons reside in the place between the back of the mirror and your perception. Giving them information, corrupting and taking their soul. I would like you do a small task right now. I would like you to reach into your pocket and take out your mobile device, typically today it is a smartphone. What colour Black? Swiping left and right, up and down. People are scrying. Communicating – unbeknownst perhaps. Distractions of T.V., football, news, pop music, starring forever to the most demonic entity of all, advertising. Slaves to the perception and view of the world given to us, by our modern scrying. Advertisers, marketers, hype merchants, Adverts are not just the advertising, but the view from the news, the tv shows, all designed to give us a certain frame of mind.

It is a black mirror, you can see yourself reflected on the screen before it lights up from the touch or stroke of a finger. Gazing into this object once activated you can scry. You can see what the future will hold in your calendar, for example. You can also see the past, in your messages to other scryers over potentially long distances, the conversations are saved. The same goes for the photographs in your camera. You can also, if you wished, browse the news of far-away places that you cannot visit at the current point in time, even, in some cases, watch live feed from a video. What’s going on in some unreachable part of the world, you can see through your black mirror that you carry around with you every day.

This is scrying, in the modern world. Technology has given us what we’ve tried to do throughout the centuries, and there is quite a long history of scrying. It goes as far back as the Egyptians, who would pour oil into a jar and try to divine what the future held for them, or ask a deity answers to their questions while a young boy would stare into the oil and give them the answers from what he saw. Scrying has always been done using a flat surface but it seems mirrors and liquids have often been the most popular through history. Crystal balls and types of gemstones were used as well, always a flat, reflective surface that would be stared into until it gave the user the information they sought. The famous Nostradamus himself used not just a mirror, but a black mirror in particular to help him divine the future, he is so remembered for.

In history and science it’s disputed that it ever worked back in the past, after all, people were staring into a reflective surface until they saw something after having made themselves relaxed enough to experience something. Yet, here today we have the real thing, that actually works, your mobile phone is the ultimate scrying device. Quite often the default touchscreen is of water that ripples in response to your motions. Is there magic you carry in your pocket?

Is there more magic you carry in your pocket, without a doubt. Money. Money is the most important magic trick of all time. A discussion for another time, feel free to view my Youtube channel for the video ‘Money and Alchemy.’

Porsche Cayman Re-style Is On The Way