Home > Articles > Beasts of the gods that were made of metal.
Articles

Within our mythology there are tales of creatures with what are described as bodies of metal; gods themselves and/or with metal creatures that have the ability to ride over land, sea and air. Gods and figures of history made out of metal. Today these tales are looked upon as merely metaphors that our ancestors used in order to try and describe a purely spiritual experience involving ethereal, mystical beings. Lets take a step back and consider what if that outlook is incorrect?

Why would our ancestors have used something so rigid as the depiction of metal to describe something that was ethereal and is considered fundamentally metaphysical. Why use the visualisation of things that are structured. Illustrating valuable materials and terms such such silver and shiny to impart something that is taught today as light and airy? Is it therefore possible that the idea of the metaphor is wrong, and our ancestors were trying to describe something that was in fact rigid and physical? Let’s have a look at some of those stories not so prominent in the collective consciousness today.

“Al” from Armenian lore, a half human half animal creature that especially likes to attack pregnant women. The Al may have originated in the Babylonian lore of the ‘Ala’, A malevolent spirit in the form of a black dog that causes diseases. The Al however is recounted as having one fiery red eye, iron teeth, brass fingernails, the tusks of a wild boar, and long, snakelike hair. The Al likes to live in damp and dirty places, including homes and stables. It also frequents wet and sandy places along roads. The Al and the light being within is alleged to attack pregnant women and their unborn children and pulls out their livers. It is known by report to cause miscarriages and steals newborn infants.

“Ala” Talking of the ‘Ala’, Turkish term, borrowed by Serbs and Greeks, for an also known as an Eclipse vampire. The Ala replaced the names of Varcolac and Vukodlak as the sky creature who eats the sun and the moon. Ala can assume human form; drink boiled milk and has a fondness of wine. When they become the great Ala, They bring storms and fire that ruin crops as it flies over. The Ala when it passes over it is said to be in the form of a metal eagle.
There’s a Serbian folktale of a peasant who lost all his money because an Ala had ruined his vineyard, who then went and got some advice on how to kill it. He waited under his pear tree with a gun full of lead, silver, gold and steel which could pierce the metal skin. When the Ala took to the sky darken spewing thunder and lightning. He shot at Ala, causing the Ala to bleed a strange liquid which could be set fire too. The peasant soon replants the vineyard.

This is the description from a report of an encounter with a Baital in India:

It’s eyes were wide open, greenish brown and never twinkled, it’s metal hair too was brown, and it’s face three different shades of brown. It’s body was thin and ribbed like a skeleton or bamboo framework, and as it held onto a bough, like a flying fox, by the toe tips, it’s muscle stood out as if they were ropes of coir. It had no blood, and it’s skin felt icy cold and clammy like a snakes. The only sign of life was the whisking of a ragged tail spewing smoke.
It’s skin is “iron-like” and impervious to blows, to the sound of a blacksmith striking an anvil.

The Huli jing from China can transport people through the air in its metal body and enable people to move through walls and closed windows. It is said to be invisible by day, but can be seen at night lurking on rooftops. Its inner figure can shapeshift can take on the form of dead people and haunt buildings, it’s also said to sexually assault people in the form of a dead person and leave them pale and ill. It is written that the Huji-jing takes the child from expectant mothers. 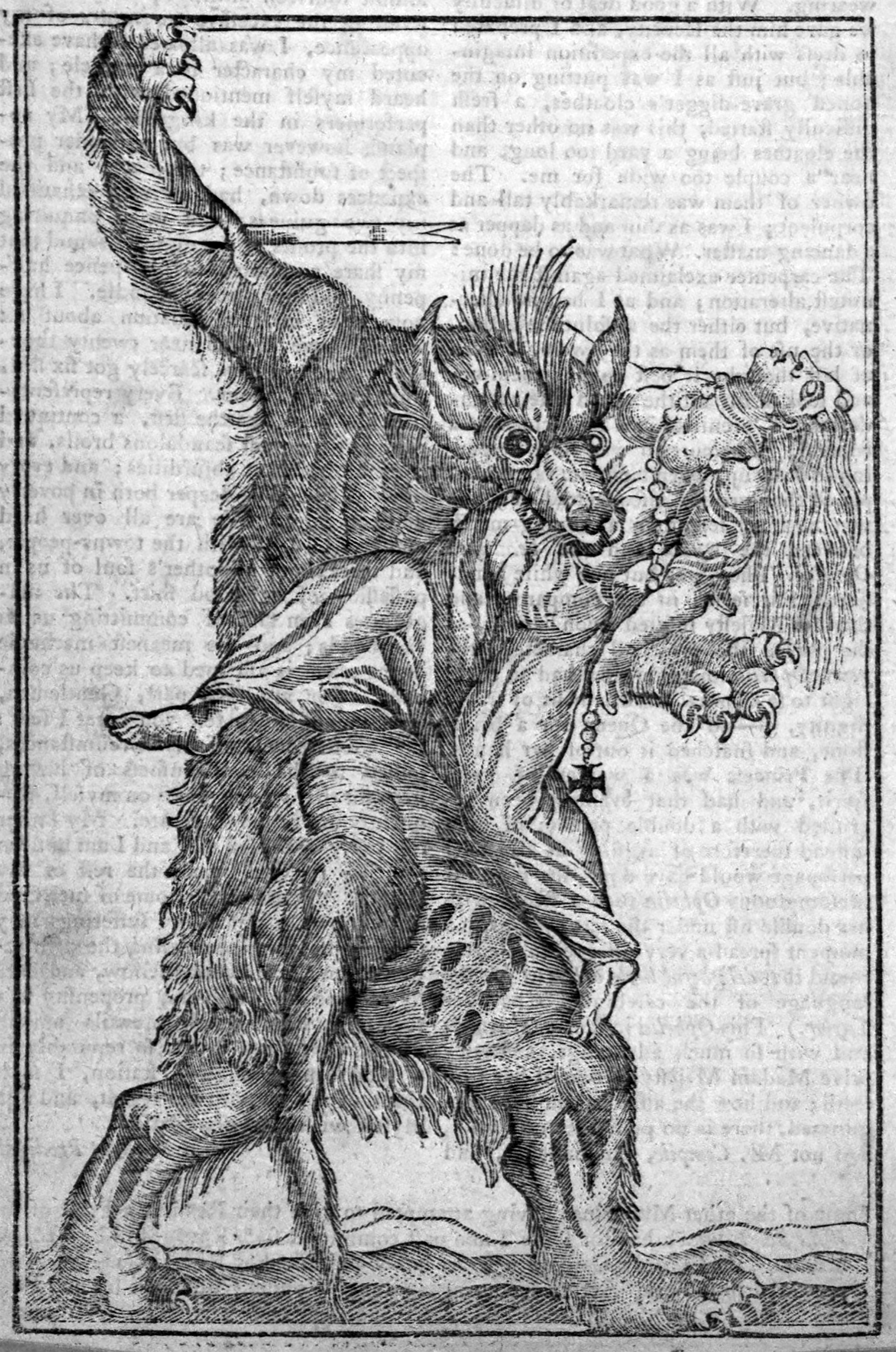 It’s not the loup-garous themselves that caught our attention, but rather the ‘aircraft sized’ giant metallic bats. The Loup garou are themselves described as being half human/half wolf beings and they used their aircraft sized metal bats to travel vast distances over France and visit peoples houses in the night.

Nuckelavee
From Scotland, this creature is described as being a skinless metallic amphibian centaur. It has a piglike nose that snorts steam, and it’s breath causes crops it comes into contact with to wither and animals to die. It has one single bloodshot eye and a horses torso (considering our ancestors their only point of reference to something which carried people at speed is a horse. So they are in effect describing something that is carrying people.) which is several feet wide and around 4 feet tall. It’s know to travel by land, sea and air. Sounds like a people transporter much?

Are all these reports metaphorical allegories meant only to be interpreted as stories that have been dreamt up to teach children about the world around them? Or is it more likely that what our ancestors were doing was attempting to describe what they saw using the limits of language available to them at the time. There is certainly a lot of coincidental similarities of these metal beasts across continents if they are merely stories.

If it’s the latter, however, then what were they trying to describe? If we look at these reports now through modern eyes, something that can cause a person to travel through solid objects others being capable of carrying that person over long distances, stories such as Poseidons’ 6 winged gold horse. Odins great flying reindeer Sleipnir that can carry many people which is a grey in colour and has 8 legs.

Jonah and the big fish where he is “swallowed” for 3 days and he can see through its eyes, has metal cold skin and of course God/Yahweh speaks to him inside, even having dinner with Yahweh. These come across as more of a type of vehicle. Similarly with giant bats, no creature exists that could withstand the weight of any humanoid being and still have the ability to glide, never mind fly, as the weight would overcome the airlift. So what could the term ‘aircraft sized bat’ be trying to describe? A type of aircraft with wings that resembled the arched, pointed shape of a bats wings seems more likely.

Similarly, a single fiery eyed ‘creature’ with iron teeth, brass fingernails, tusks, snakelike hair and the ability to become invisible using bells on it’s head is not just surprisingly specific, it seems more akin to a mechanical controlled vessel than a living creature – as are it’s actions when you consider it’s fondness for removing livers and foetuses.

Let us not forget the giant metal Talos with oil for blood that patrolled a remote island on the island of Crete, shooting down ships that got too close with it’s fire eye and threw rocks at passing ships. A archaeological point of statement that Crete is the only Greek island not to have sea defences, having a giant iron tireless tool of the gods, who patrolled the beaches of the island, they didn’t need the defences.

So are these things simply impossible creatures dreamt up by the imaginations of our ancestors? Certainly not when you have a look close at some of the reports. Our ancestors went as far as to say, not only of their encounters, but how to avoid them and importantly wrote it down! Over time, these stories that were so part of life, were forgotten to veil of myth.

Episode 14 - Rabbit Hole That Is Reality