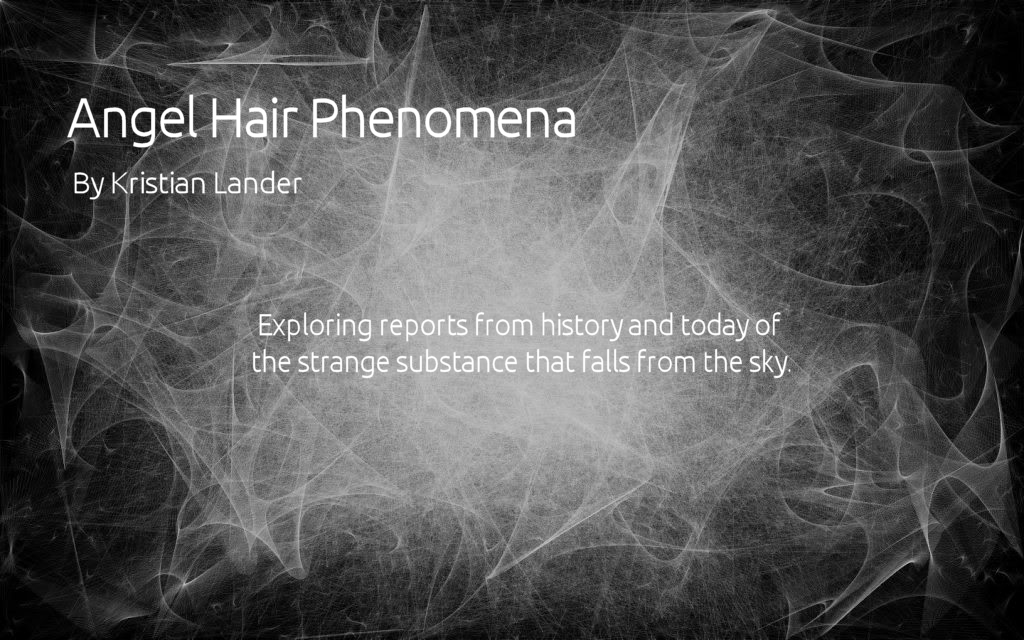 Angel hair is a rare and most strange phenomenon that currently defies explanation. One can only imagine what delight it is, to see it fall. When we touch it mysteriously the angel hair is absorbed by the body. Named ‘Angel hair’, for its similarity to fine hair, or spider’s webs, and is also comparable to ectoplasm and pixie dust. Reports of angel hair say that it disintegrates or evaporates within a short time of forming. 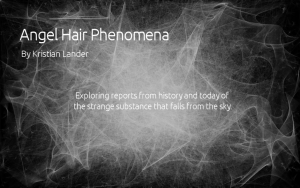 Lets start with a few early reports; In the September of 1741 in Hampshire a blizzard of this angel hair came down over as it described and continued for hours. Residents from 3 different towns describe the events, these towns were Bradley, Slebourne and Alresford so if one were to go take a look at a map, one can figure that the downfall came over a considerable area.

There are numerous reports of Angel hair from all over the world, from Australia, North America and Europe. One report I have read comes from Southern Australia from 1914. There were accounts of strands of angel hair falling from the sky their lengths averaged around 20 centimetres, and when reached the ground they quickly dissolved. Three weeks later another shower of Angel hair came to the same area and apparently lasted for over an hour!

Doing a few searches yielded information that 2 police officers in 1950 reported to the Philadelphia Enquirer newspaper that they one evening were on patrol, and saw what they assumed was a parachute falling to earth. When the object landed the officers stated they saw it glow in purple and white colours. One of the officers touched the substance “the mass on which he laid his hands on dissolved, leaving nothing but a slight odourless sticky residue” and within 25 minutes it had all disappeared.

Reports about Angel hair have continued to come in on a global scale, falling sometimes in balls rather than flakes or strands. Descriptions do vary from fluorescent colours, to a jelly like goop. Yet maintain the same characteristic absorbing and dissolving into the ground or anyone who touches the substance.

According to the Wikipedia description – Angel hair or siliceous cotton is a mythical substance which said to be dispersed from UFOs as they fly overhead. It has been described as being like a cobweb or a jelly. It has also been reported at sightings of the Virgin Mary.

There are a number of theories to what causes angel hair, one is that it is in fact Spiders or another web spinning insect. As there are those spiders who cast a web and migrate by flying on the wind currents. The conjecture to this, is that there is a marked absence of spiders in the material described as angel hair, so the link to arachnids has not been proven.

Another theory is that it may be being created as “ionized air sleeting off an electromagnetic field” that theoretically surrounds a UFO and anti-gravity vehicles. UFOs are frequently claimed to possess high electromagnetic fields, unfortunately just like Angel hair, UFOs unless you are a country that is creating such crafts or those who have possession of such exotic craft. It is virtually impossible to test this theory.

Analytical scientist Phylliss Budinger, has used the restricted samples of angel hair that exist to develop some conclusions about the properties of the chemicals. She has investigated 4 samples obtained from across the US. The 1st sample was examined under a powerful microscope where found to comprised of bundles of fibres, rather the single strands, thinner than spiders silk and the tell tale droplets of fluid that are always apparent in webs were not in the sample of angel hair. She was able to determine that all four of the samples had a similar chemical and molecular make up, defined an polymer containing protein-amide linkages. The amides were found to be ammonia-based compounds.

Budinger’s findings indicate that angel hair comes from a biological source. To date, she has been unable to identify the source. Angel hair is notoriously difficult to collect, it is highly sensitive and also there is the contamination aspects of exhaust fumes, animal and human touch. And as no-one knows where it is going to happen, it is made even harder.

There is another substance that also conforms to these attributes that is the alleged etheral material “Ectoplasm”.

Ectoplasm is a substance taken from a mediums body and according to Arthur Findlay, is then mixed with an etheric substance. This enables spirits to affect physical matter. Ectoplasm is very light sensitive which for that reason many seances and physical circles are held in either total darkness or with a low red light.

Ectoplasm is extruded from the medium through any opening of the body, and though the skin. Physical medium “Dean Kenyon” goes into details regarding ectoplasm in his interview with Kristian Lander. Available on Youtube to watch and listen http://www.youtube.com/watch?v=4udvHVIyP3A

The alleged physical properties of ectoplasm and angel hair are common in their appearance, a liquid, gel akin somewhat to shaving foam, similarity they both seem to have an absorbing ability. Angel hair seems to in reports dissolve into the skin. Albeit ectoplasm comes from the body, and dissolves into the body upon its return. With ectoplasm there is often a distinct odour of sulphur and sometimes ammonia. As explained earlier with the conclusions of Phyllis Budinger ammonia is present in angel hair.

Is perhaps Angel hair is an externally created ectoplasm?

Any other similarities to other phenomena?

In the January of 2012 in Bournemouth, it began raining balls!

3cm blue jelly-like balls came down during a hail storm on a late Thursday afternoon. Steve Hornsby was in his garden observing the strange occurrence of the skies turning colour “The sky went a really dark yellow colour.” which he later reported to the BBC http://www.bbc.co.uk/news/uk-england-dorset-16754531

Using ingenuity he kept them in his fridge! Which is brilliant! So we can take a look at this most curious of substances.

The Met Office issued a statement that the jelly-like substance was “not meteorological”.

In my opinion they look eerily similar to the planting beads which you buy at B&Q and Homebase. Designed to hold moisture and keep the plant’s roots hydrated so you don’t have to water them as often.
Also these are silica gel beads are used in aviation as CO2 absorbers. So its possible if these balls were falling from the sky, this could be a logical reason for the balls.

https://www.youtube.com/watch?=zSqWHe0eVxg
This is a video of c02 absorbing “Wet gel balls”.

To keep us in the mystery as we round up on this piece. Paying a visit to the collective works of Charles Fort. “The Complete Works of Charles Fort”, in 1883 a report from South Africa of a case very similar of spherical blue jelly like balls falling from the skies.

So its to time to look to the skies and watch out for falling hair and balls!