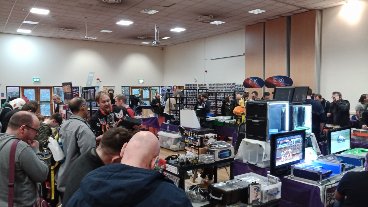 A weekend full of excitement, glitz, and gaming! Right before the Christmas holiday. Hoping to rekindle the gaming love of the city of Nottingham. Giving people hands-on fun, plenty of traders, and special guest speakers! The Nottingham Video Game Expo held at the Richard Herrod centre is a bold step to stamp a new gaming event on the map.

More than 6 months ago, James Jarvis unveiled the plan that Alex Hunt and himself had as a vision of the event. These days, working in retail leadership in the run-up Christmas period my availability would be disappointingly limited. As the time approached had been under the weather taking a few days off, well over the worst. Took that opportunity to stay off and attend.

Beginnings of misadventure. Taking the citys bus, to find it had been redirected avoided the venue’s road due to weather and steep hills. Hopping off and taking the trek to Richard Herrod Centre. On final approach, reached into my pocket to bring out my gimbal camera, only to discover the memory card slot was vacant! It could have been one of those days. Thankfully the misadventures ended there.

Catching up with James and Daniel meeting with Alex and his partner. As the vendors completed their adjustments and final set ups. A large tall room, full of people with a giddiness and intrepidation. Games on hand to play, stall holders, book sellers, art, gaming trinket sellers. magazine outlets and more.

A real spirit of camaraderie was engaged once people started flowing in. Traders were chatting and sharing their wares. Lots of hands on touching as retro games and magazines were sold in abundance. Community engagement from Nintendo Nottingham and The Dreamcast Junkyard rallied people around to play. Wave Game Studios wowed with Intrepid Izzy and modern retro offering. The guys behind the impressive Evercade Magazine were giving people a chance get hands on with thier passion. Get Well gamers and the Amiga stand always had a crowd.

Dominating the room was a stage, with projector showing graphics and videos, gathering throughout the day was guest speakers and live podcast recording. As Retro Hour interviewed David Wise, Kevin Bayliss and Graeme Norgate formerly of Rare Ltd. Talking about the creative and technical challenges of some of thier much applauded titles. With a deep rooted Nottingham connection, as Rare internal teams evolved to become Free Radical, creators of Time Splitters. Who become Crytek UK, now Dambuster Studios. Excitement and smiles rose as an announcement of the beginnings of a New Timesplitters project.

There was much abuzz about the Nottingham gaming scene, screening of a short film of Screenplay an annual event from the late 90s to early 2000s before itself evolving to become Gamecity and then the National Videogame Museum after it left the city, a huge hole has been left unfulfilled. Theres a breadth of creative, passion and need for Nottingham to be a hub of gaming events. The speakers and audience rallied and thanked James and Alex for a new bold event on the city’s calendar.

2 days of sold out tickets, showing an eager audience is here and wants an expo, hands on fun game filled event to sink their teeth and Joy Cons into. Much to applaud, much to learn but the formula works and the Nottingham Video Games Expo could well become a staple of the wider gaming cycle calendar with the Richard Herrod Centre proving capable of being a great venue for events outside of the city centre.

A Dark and Stormy to watch a movie - Halloween announcement