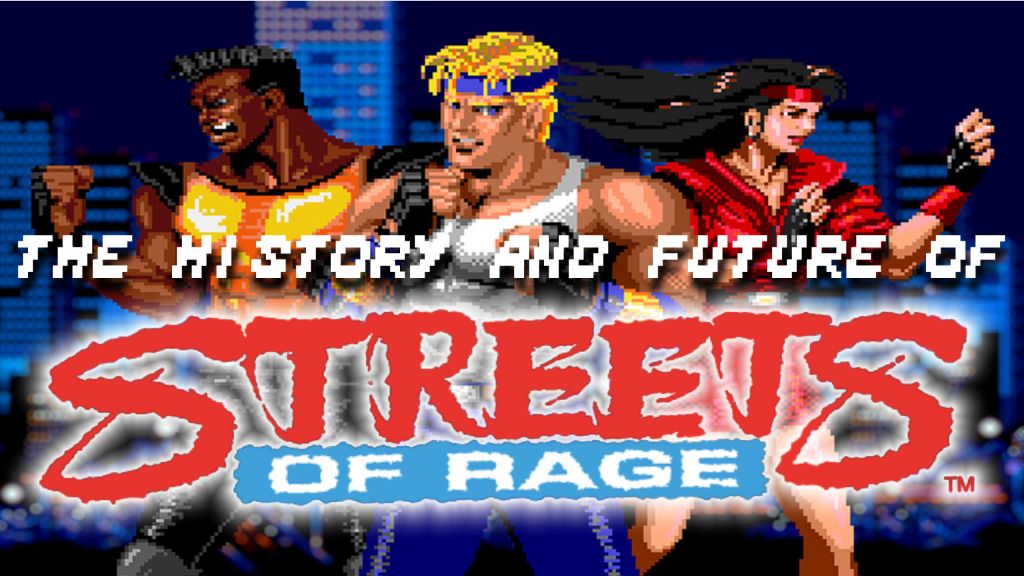 Many memories of gamings 2nd golden time. Following conversations with the team behind popular Netflix show ‘The Toys That Made Us’, call it a base pilot if you will. Compelled to make a video-game documentary in the same vein. ‘No clip’ currently occupy the space of video-game documentaries. They have a great outfit, like them very much. A space where also more to flourish.

Over the course of the last 3 weeks, taking up much of the free time. Created this just shy of half-hour special into SEGAs classic ‘Streets of Rage’ series. An accessible engaging well edited video. Got to take our new studio outfit on a good run. Exploring how the origins of the initial title came to be. What the factors and influences were. Constructed from interviews and information made available over the years. I made contact with SEGA Europes PR team for potential interview and insight. Reached out to the community and webmaster MrDim of SOROnline.net the largest resource of Streets of Rage on the internet. Though an interview did not occur prior to the completion of the project.

There was material made available to Read Only Memory from SEGA in regards to the development of the title, which was featured within their physical book release Sega Mega Drive/Genesis Collected Works (https://readonlymemory.vg/shop/) early idea and prototype sketches. The controversy of the third title, becoming heavily edited for its western release. The result of those changes, struck hard at SEGAs bottom line. Which pretty much nailed the coffin lid down for any sequel beyond 3. It is not that attempts did not occur, and not few in number either.

An opportunity to see rare early prototype footage, from the Saturn, Dreamcast. Modern revival attempts, where the stars didn’t align correctly and production houses closed mid-development. Simultaneously the community rallying around the fan-driven development of Streets of Rage Remake. Segas initial support for this project before pulling the rug on its official release. So here we are 24 years on since the last official release, still tapping our foot to the memorable trance and techno. This is the History and Future of Streets Of Rage.

It must be noted, that within a short period of time, I noted in my Youtube feeds a small number of other videos have also been released of the topic.  Charting a similar course of direction, there are interesting comparisons to make. The advice from this producer is to enjoy this one first. 😉 then as fans lets all nudge SEGA with them.

Game footage of Streets of Rage 1,2&3 is captured through OBS, Sega Collection on Steam.

Bare Knuckle 3 translated English mod acquired through SORonline.net for the purpose of recounting the lineage history of the title ‘Streets of rage/Bare Knuckle’.

Copyright logos, trademarks are beholden to their copyright and trademark holder.

SEGA, Nintendo, SONY, Playstation, N64, Sega Saturn, Master System, Sega Mega Drive, Sega Genesis, Capcom, Namco, Taito, Technos imagery are beholden to their respective company no violation intended, other than relevance to the point. Company and individual names are their own. All used in a fair use context with no intention of infringing rights, making claims or statements. Other than is necessary in a reporting context. Video is not monetized.