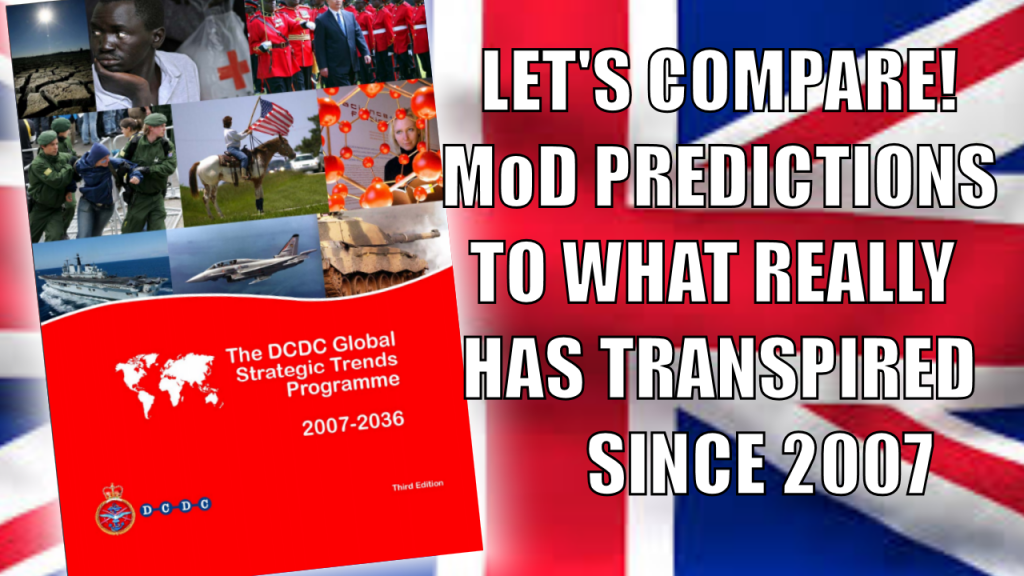 2007 to 2016 nearly 8 years of events. What has transpired in the real world to what was proposed and probability based, expected to occur. Aimed to be an accessible video for all, clear presentation and graphics through. Going through the document, the 90+ page Ministry of Defense DCDC Global Strategic Trends Programme 2007 – 2036 published in the January of 2007. Envisioning Britain’s strategic context up to 2036. Shifting economic relationships, geopolitical changes, resource challenges and more.

We focus in on 3 aspects Resources, Social and Political. This document was before the banking crisis, before Brexit, before the mass migration into Europe. Lets see how much was expected to occur.

The document does also go in to technological development, augmentation, cyber developments, trans-humanism, future of the internet, science and technology as well as military capabilities and prospective interventions.

There was/is a subsequent document entitled out Trends beyond 2040 produced by the Ministry of Defence. Was first made aware of these documents following an interview on Red Ice Radio, in 2012. The link below goes to an episode on Red Ice Radio on the topic of Transevolution https://redice.tv/red-ice-radio/transevolution-the-coming-age-of-human-deconstruction

Top 10 Foods That You Should Get Rid Off