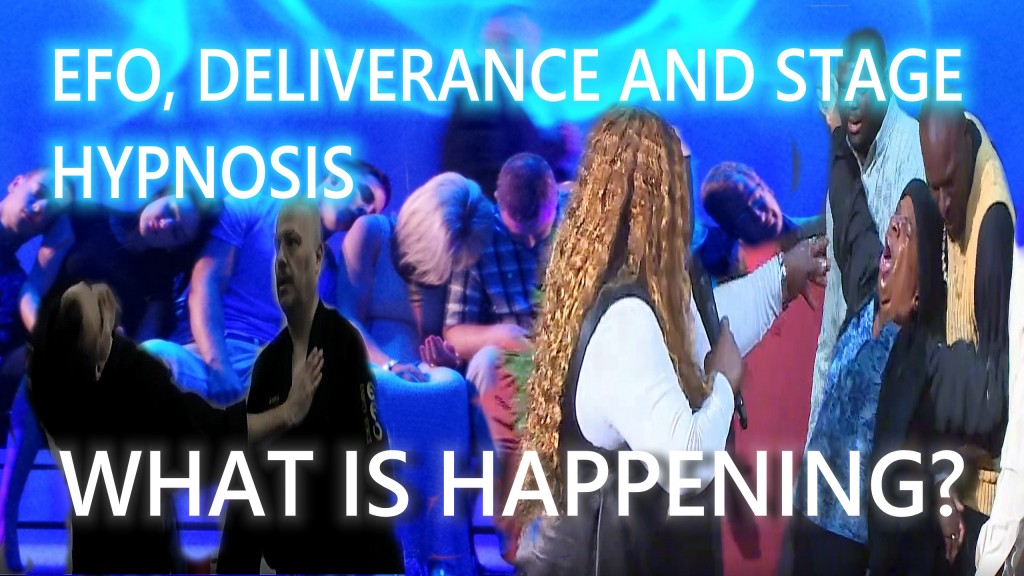 Drawing attention to the similarity between 3 subjects – Empty Force, the charismatic deliverance ministries and stage hypnosis. Watch, enjoy, share and like. Observing the flailing to the simple wave of a gesture, people obedient to instructions and compliance with the group dynamics. 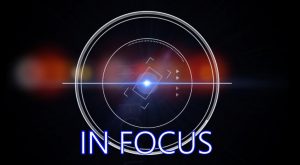 Each aspect utilizing a working knowledge of compliance. Empty Force instructors and the charismatic deliverance prophets appear to employ techniques that are indistinguishable from one another.

Followers enchanted by the apparent mysticism which is accessible to those who attend. Hidden Jedi-like knowledge and first hand tap to the Holy ghost. Is there truth to their claims? I liken it to attending a stage hypnotist event, with one difference on the theme as there is the knowledge that it is a show. ‘Honest, about being dishonest’ as Derren Brown so often refers. The participant audience having been primed by their expectation of what such a show entails. This expectation is then the key, the same techniques can be employed by the skilled stage performer.

“Part of the skill being a good hypnotist, is blending instructions. Very slightly ambiguous, so that he will do what you tell him. But the audience will think its an automatic response.”

With EFO, Master Jukka Lampila of EFOFinland and his instructors put forth they can incapacitate and disable an adversary with what is known as an empty force emitted from the heart. By opening the heart, possible can stop an attacker without even touching him. Appears that EFO only works on people that believe EFO works.

Recent motivations behind making this short, were watching a documentary film crew following the exorcist priest Bob Larson, and his daughters on a crusade trip to the Balkland countries. The performance aspect of the routine rippled through the curious mind. Went looking a number of the EmmanuelTV videos on Youtube. Drawing also from being a long time martial arts practitioner, an instructor formerly of Freestyle Tae Kwon Do, GKR Karate, and wrestling/grappling arts. With more than a taste of the unexplained, weird and wonderful. EFO has been on my awareness radar for a few years. Wanted to commit the time to produce the discussion, after being reminded of when I was invited by self-proclaimed ‘Prophet Ezekiel’ to attend the charismatic deliverance event** – the similarity at the time struck me instantly. Between the actions of deliverance, EFO and stage hypnosis events. Were the supernatural motions of Gods healing powers and deliverance really occurring? Are were they falling down to gestures and instructions because they were expected to be. Were people being immbolized by the Force? Or… are they falling down to gestures and instructions because they were expected to?

Dynamic group expectation, is what was I believe to be occurring, everyone chanting singing along. Very easy for people to be swept in the charismatic character behaviour full of bravado and grandeur. Lots of ticks and nudges to bring something together. People unwittingly (perhaps) are being taken for a bit of a ride, that comes with a lot of outlay financially. The short film is not aimed to be provocative nor is it intended to be a sweeping statement, more an overlook look and highlight. In Focus upon the similarity, and the techniques being employed. With some insight by those who can add to the conversation.

Challenges, the challenges of technology! Fought through software crashes, PC getting stuck in a repair boot loop. Has been a slog to produce this, 5 days 8-12hrs editing per day.

Thank you for your time and support.

Thank you to Sion-Marc Simpson and Martin Taylor

(**A whole story within itself. The Prophet indeed made a lot of profit! There were distinct moments of the service and another later to seal the deal on my conclusions. There was a woman who claimed to be in a wheelchair, who miraculously was healed and could walk. Only this woman was his assistant/partner I had seen him with a day prior going shopping. She was carrying the bags, walking just fine at the time. Repeated phrase of ‘Give to God, Give to God!’ full of vigor and confidence, to which many took the instruction and was quite literally throwing! money unto collection trays being waved around by his entourage. The illusion broken, not for the ardent believers. The prophet also driving an uber tasty silver executive BMW, his income solely delivering ministry. )

Fair use is a term to describe the use of copyrighted work without direct ownership in a manner that is new or modified.

Have not sort to alter or change the context of what is in the content used, other than to illustrate the similarity. Credit and copyright material referenced to sources.

Beautiful Architecture That Will Blow Your Mind