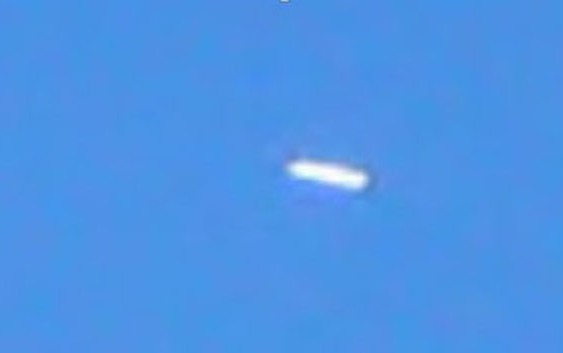 Leaving work, 16.15 Sunday 30/07/2017 walking in an Easterly direction towards the Noel Street tram stop after a 10 hour shift at work. With the Silver aluminium cladded Pinnacle tower to my right, a tall block of private flats in the centre of the Hyson Green area of Nottingham. Crossing my mind is the object I saw with my partner last week. A flying rod. A thin tubular tic-tac like white rod, very high in the sky. Moving over Bulwell. Silent, more likely so high that it’s sound didn’t reach us. Rapidly the craft moved in the perspective direction of Strelley/Aspley. Just after Sundown.

Our conversation at that time, was the event of the previous Sunday at work from the warehouse yard. I’m describing how I was disposing of cardboard for recycling. The clouds have parted after a brief quick shower. Sky is beautiful, with silver clouds and dazzling blues. I looked up to admire and take in the warmth of the sun. I look in the direction of Pinnacle tower very prominent in the view from the yard. Up above moving silent is a slim white rod. Gliding across. It did not stay in my view for too long as the work building became an obstruction to the view. Maybe 5-8 seconds. The time around 8pm. Much higher than the cloud layer from my perspective.

At the time we remarked, how coincidence played its role in talking about the sighting, just so happened we then saw a similar object. Timing eerie. Quite literally explaining the object I saw the previous week, as I’m doing so I remarking about the sky gesturing and talking with the hands as we all so often do, lo-and behold there’s another! There’s something of a known noted phenomena as one notices coincidence, more appear to occur. What was the probability?

So what is a flying rod? Flying rods have a large presence in the unidentified flying object report logs. Exhibiting no form of typical aircraft pre-requisites such as wings, tail rudder, dorsal aft leveling wings and also lacking engines. Just a cylindrical object, defying gravity and conversational physics. Not just in the air, there are accounts of them underwater and also leaving from the waters surface. Their forms are found reported across the world. Records of UFOlogy cite claims and images taken by the civilian, professional and military. Their explanation – unknown. Theories abound of course. 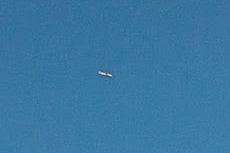 Lets bring it back to reality
According to FlightRadar24 spokesman Ian Petchenik there are on average around 16,000 aircraft in the air at any given time, that they track. Nottingham has the East Midlands Airport, with more than 100 flights both passengers and freight every day. Its a busy place. Very near Bulwell is also the Rolls Royce Aerospace Hucknall airfield, operating predominately private flights and a flying school. Annually playing maintenance base to WW2 aircraft and aerial display teams throughout the summer months. Aircraft in the skies above is a very frequent occurrence, to see something different is remarkably noticeable.

The timing is interesting, the sun lowering in the sky as the life giving daylight comes to the end. Both sightings occur around that time of the day. We are aware that illumination and lighting can create all kinds of anomalies. Which is what I believe has created these apparent rods, in my 2 sightings at least. Anomalies of lighting…on normal aircraft. When light from a lower angle hit the plane on the side, a slight banking of the plane the wings from the angle of the viewer “appear” to disappear. As they are in relative line with the plane. I had to wait a couple of days to spot a good example. Early mornings at work were my opportunity. Capturing these photographs on my smartphone. Location: Nottingham. Bulwell Tram stop. Approx 0635.

The aircraft observed was a forefinger tip width, arm outstretched. Cameras never do the visual image justice, due to the lens. Only the very slight shadow is noticeable on the fuselage. Apart from the this, visually the aircraft is a white flying rod. 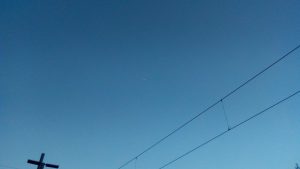