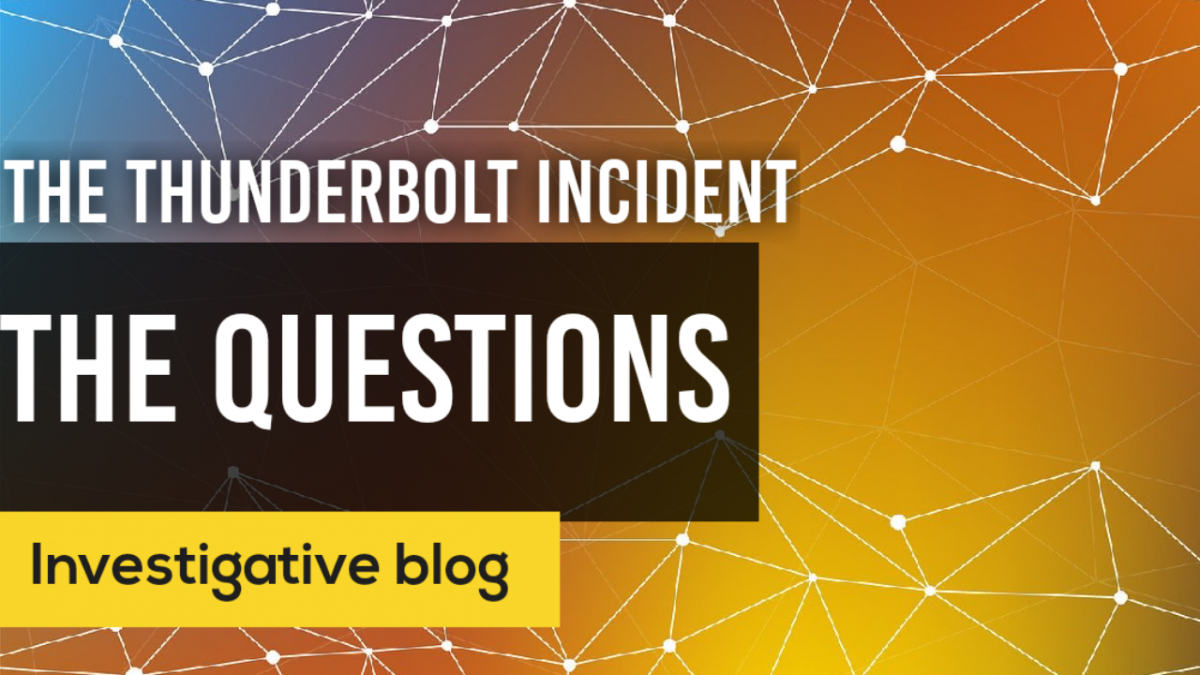 It is likely many of these questions will become their own threads in the coming investigation process as we push forward to create a documentary on the incident. This also is not the comprehensive be all and end all of the questions, it’s just where we are starting. The two-fold approach allows rich information to be gathered which is where I’m reaching out. Would really appreciate your contributions, whether reports, clippings, submitted statements, accounts, leads, to bring all the information to one place – available for all as a resource. This thread is the questions that come to for front, maybe you have the information to answer them, expand upon them.

Data wise, we are presently using a number of sources, some we can reproduce here some we cannot due to awaiting copyright permission and personal requests. Some have chosen not to be disclosed, which we will work around as best as can.
I will the list the key source stories of the events as such, to be used as the reference points for the questions, there may be sources listed in those sources which presently cannot verify.

What are the sources of the events? Can I read what is alleged to have happened?
Yes. A source is Cosmic Top Secret wrote by investigative journalist Jon King, which details over a number of pages listed as File #31. His file documenting the case is derived from communication with 2 individuals. Dominic Belgin and Andrew Emerson in 1997. The version of this text I read prior to obtaining the physical text is available on a website entitled “xposeufotruth”. Listing the event as “Notts UFO”. That have the copyright permission of the text available to read.
When referring to aspects, it from the text we are deriving information.
Home page is http://fierycelt.tripod.com/xposeufotruth/index.html

A second write up of the events is available from a post online in two places Entitled both times as “Ashley Rye wrote to SKYWATCH (Internet UFO News Server)”. Nexus Magazine, Volume 4, #6 (October-November 1997). Issue 406 of Nexus Magazine. Nexus does have an ISSUU version of that edition to read. https://issuu.com/mufonnexus/docs/nexus_-0406-_new_times_magazine/66

Recreated also on what was formerly a Geocities/Yahoo website then updated in 2009 to become an Oocities page. (It is not known how long a free web hosting site, will continue to be online.) https://www.oocities.org/sutton_in_ashfield/aliens.html

Eyewitnesses – a number of eye-witnesses have made statements over the years, I will only recreate here what I have requested permission to do so and what is available in the other sources.

News reports. At present, despite there definitely being a number of existing press stories on the matter. Particularly around the time of the event. The newspapers microfilm records are unavailable.
Hucknall Dispatch, Mansfield Ashfield Chad, Nottingham/Evening Post, Free Press, Recorder. If you have clippings and scans of relevant articles and news. Please do send them for inclusion. Kristian@KristianLander.com or am available via social media. So the press reports we are going off, is listed in the sources above.

These are our building blocks.

Any other websites or videos with related material?

Yes. There are some 2 videos available on Youtube produced by Ben Emlyn-Jones HPATNWO. Also a Facebook group “The Notts Roswell”.

Who are Dominic Belgin and Andrew Emerson?

For those, that haven’t read one of the sources. Dominic Belgin and Andrew Emerson were independent UFO researchers in contact with Jon King who wrote the File on the Thunderbolt Incident. They presented the case at the EM-UFORA (East Midlands UFO Reports Association) monthly meeting in 1997. In File 31, it mentions they attended in a matter of days after the incident the physical site. Conducted interviews, gathered information. They were assisted by “along with a number of science colleagues”.

Have attempted to contact them, and as of writing, this has proven challenging. Neither have a social media presence. There is no reference to Dominic Belgin outside of the above sources online. There are a few Andrew Emersons, who have sent messages too. No replies as yet. Also using Pipl to a deep search of the web, deep web – no such luck. Have reached out to Anthony James of EM-UFORA for any potential contact details may have from wayyy back in 1997.

For those with a disciplined and measured interest in the field of UFOlogy, its likely people would pop back up and look in every so often. Reached out to seasoned veteran contacts in the field of UFOlogy, including Phillip Mantle, Steve Mera, Heather Dixon, Robert Moore, Gary Heseltine, John Dawn and others. At present, no positive leads.
– which leads me to also pursue contact with Jon King, much the same way – some people just go dark. That being said I am in contact with the publisher in regards to copyright inclusion in the documentary and they have forwarded correspondence to the author.

Who were the scientific team?

Where were they from and their fields of expertise?

Are we sure of the Date and Time?

No, and there are many reasons. Investigative actions are pursuing those lines on inquiry.
http://kristianlander.com/?p=2591 – The Thunderbolt Incident – Date and Time. Are we sure we are not confusing another event? Potentially yes.

For those who claimed there was structural and physical damage to properties. There is a series of questions. What are the addresses of houses were damaged? How was the insurance settled? There are quotes from a Local insurance broker Mr Mike West. Who allegedly dealt with many claims. Up to 40 on a single street. What street? Allegedly the flat block on the Coxmoor estate was clipped, how was this settled with insurance, if at all. If it was denied, on what grounds? There is a quote that claims were denied due it being cited as UFO causing the damage and this was used as a loophole for insurance companies in paying out. So how can we verify these group of questions?

We have a statement from a person, who lived opposite the Fire chiefs house and after the explosion, thought to be a jumbo jet or something like that due to the sheer noise and vibration. His alarm across the road rang off just a little after 1.30am and he jumped in his car and sped towards the station. He then attends the fire with his crew at Thieves Wood. As a fire chief, he would be given information on the size and scale if not being the one making that assertion. He is referenced as controlling the blaze in Thieves wood and making a statement about the unusual damage to the trees. Where they appear in his words to bend and have burn/scorch marks on the tree on the opposite side of the fire. Which is highly unusual. Did he attend the second and final site? and what did he see? Need to confirm those statements.

Are the trees still damaged?

Whilst a period of time has elapsed, trees are a source of information about their life. In the videos from Ben Emynn-Jones in 2013 and 2014, the trees appear to still bare the damage reported in the accounts. Intending to visit the site and get close to those damaged trees.

Was the soil removed and replaced with clay/sand?

According to the sources above, 9inches of soil was removed in a 60ft diameter area. Replaced with clay and sand, and saplings. The ground should still be checkable in the area.

Police – what was their purpose and what do the records say, they were there for?

The date has passed 30 years, records should be public of police attendance. In particular that they were holding roadblocks in the area. Whilst records may not say why they were there for 4 days. They may say, they were there. Which is almost as good. Where to apply for those records?

Who was the Russian?

This is 1987, the cold war between the West and Iron curtain is still brewing. The threat of mutually assured destruction was ever-present in the media. We have an audio-recorded account where a witness was harassed in the days following the incident. The knocks kept coming to the door. First by police, again by police, then again by military garbed office formal personnel, before another visit even more surprising and disturbing to the person. A Russian speaking individual with an interpreter arrived at the home asking questions.

Who gave the conclusion it was just a thunderbolt?

The press, though its not sure at present who or what paper. A reporter remarked and wrote, “That was some thunderbolt!” in response to a conclusion and explanation of the event was just a thunderbolt. What government / meteorlogical office / council gave that as the conclusion?
How does that tie in to the insurance matter above? If it was a thunderbolt, ie a weather incident. Why did the insurance companies, if they did – resist payment. Rather than the story of the UFO and not pay out.

Was it a helicopter?

According to one of the reports cited in the sources, officially – though who gave that official statement is not known. It was a downed helicopter. We would need to see records to find out. Do helicopters perform the maneuvres described by witnesses in those sources?

Where would the military response come from?

Which airfields in 1987 be operating where allegedly in the sources cite 2 Lynxs, a gazalle and a Chinook operate out of at 45mins notice, that they are on site scanning with powerful lights at 2.15am. Would such records now be public? If it was just a helicopter crash – may well be.