Home > Thunderbolt Incident > Documentary pre-production: The Nottingham 1987 Thunderbolt incident – What lead me to this point. 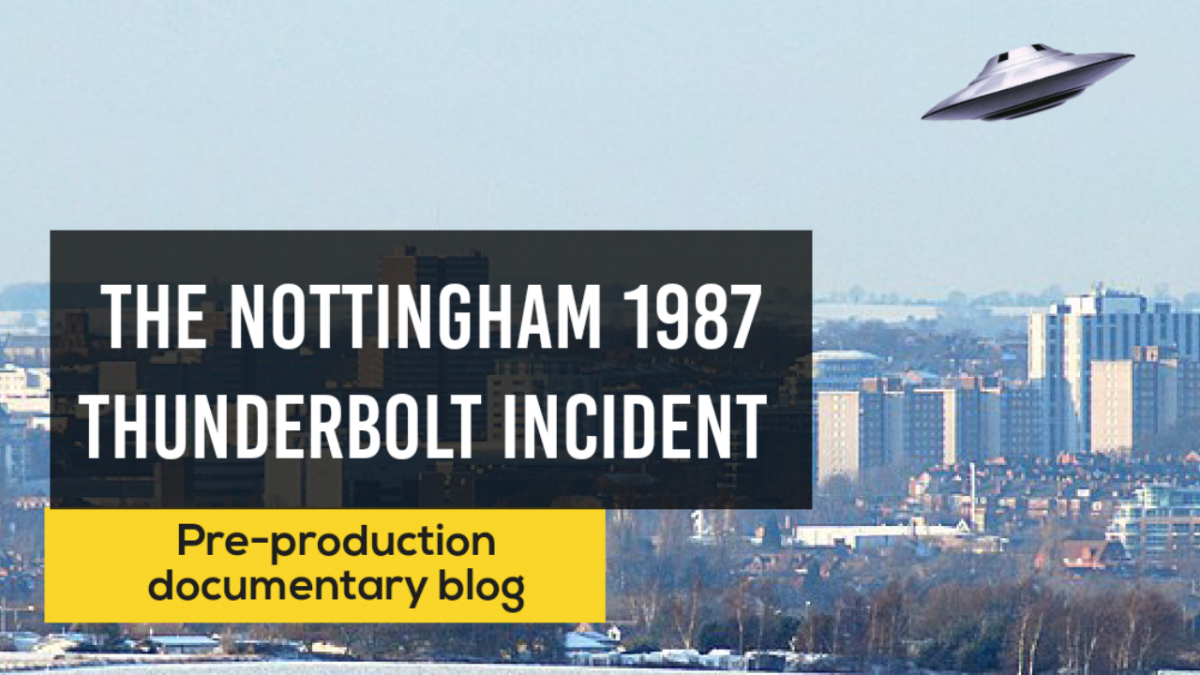 First contact. Was exploring the local studies library in Hucknall, a large town with a mining heritage in north Nottinghamshire in 2007-8. Looking for regional accounts and locally published materials of curious goings-on. A variety of clippings and notes from newspapers from the Hucknall Dispatch, Mansfield and Ashfield Chad and Nottingham Post. Glued down to A4 sheets of paper each with a heading. A couple of issues of Bygones. Pamphlets and ‘Zines. Present within a curated red folder titled as paranormal / UFO cases of the Nottinghamshire town and surrounding areas.

Contained on one of the A4 sheets was either a Dispatch / Nottingham Evening Post article I do not recall which, the clipping of an event that occurred in Basford in 1997. Pritt-sticked down firmly, marked with black pen in the top right labelled “Nottingham UFO.” Along with the date. The article contained detail of the reporter making commentary of a EM-UFORA meeting, which he had attended. A presentation by Dominic Belgin and Andrew Emerson. The EM-UFORA meeting chaired by Anthony James. It caught my attention as the write up described an event from 1987 that was compared to the sound of “God only knows why no one was killed. It was like the blitz”. A comment quoted from an Ashfield district councillor at the time. Causing significant damage to buildings and apparent mid-air explosion was reported along with an apparent crash near Thieves wood.

It was one of many cases and reports within the folder. I flicked through the others. There was surprisingly a fair few!

Next encounter with the event

its 2009; I’m regularly attending a meditation group in Hucknall. Sacred Heartlands. Alan Smith is the group leader. Guiding people to relaxing the mind from the vigours of many a rough day. Alan also with an interest in the unusual and the paranormal. Shares a story, of him when he was employed as being a National Express coach driver during the period of 1987. Taking the regular route from Nottingham out towards Mansfield. He remarked about his vivid memories of police and military blockades on the roads and the local utterings of a crash. At the time, I posted a simple blog on the Paranormal Network website of both Alan’s comments and the report of the presentation notes/clippings from the local studies library. Which later I mirrored onto The Paranormal Network public wordpress blog in 2012 entitled “Did a UFO crash in Hucknall in November 1987?” But ultimately, I did not look into the case specifically at the time. The post did generate some information and interesting comments.

4 years on its 2015. I’m producing content for my YouTube channel. http://www.youtube.com/KristianLander and with another visit to the local studies library under my belt. Coupled with a Nottingham UFO sighting over Kimberly that had recently reported in the press. Inspired, decided to present some information about the experiences that people had shared in regards to the 1987 event. Either via correspondence and conversations, including mention of the guy who showed me what looked like a cake. Attempting to string things together content for an interesting subject video.

The information I mentioned in the video still coming from that local studies library newspaper clipping. A couple of web articles and Alans observation. The Nottingham Evening Post had run a UFO article from August 2010, when the National Archives opened up their formerly classified UFO files. The journalist wrote that the Nottingham UFO crash was a frequent search! Yet no information was available in the archives about the event. That news story is now no longer unavailable online. Though the screenshots are included in the video at 4:44. Further unfortunate, the website is not archived by archive.org via the Waybackwhenmachine the former link was http://www.nottinghampost.com/truth-Near-Mansfield/story-12247481-detail/story.html Thankfully, Anthony James and a few others offered correction of information and other insights.

2020, mid-corona crisis. A chance conversation with someone who had actually experienced part of the event! A late-night wake up due to an explosion and power outage. What they assumed was a catastrophic plane crash. Their reaction was to go the window before going to their parents’ room in a confused state. The Fire chief, a Mr Watson living opposite their home. An alarm sounding before he went speeding towards the fire station. Danger! There was meat on the bone here, something visceral is occurring.

We have an explosion. A fire. Potential downed air vehicle. Military response. Helicopters. Heavy-duty equipment. Police involvement. Lockdown. Questioning of locals. It was no drill. Something happened. Had a plane come down? Apparently, it was put down and dismissed as freak weather. A stray thunderbolt. The event has become known as “The thunderbolt incident”. For those in the area of a certain age, you mention the “thunderbolt”, their eyes light up with engaged memory of that incredible night. Witnesses however claiming, they saw a vehicle / lights in the sky experiencing difficulty. A vehicle struggling to stay airborne. Some witnesses claiming multiple airborne objects. Meant more than a nudge to go find out more.

With these tangible factors such as eye-witnesses, audible-witnesses, physical damage to buildings, a military response. Apparent mass electrical system disruption across a wide area for many days. The following days and weeks also come abound with claims of massive soil and earth removal, planting of many new trees of which evidence exists.

A thunderbolt? Or something else?

Readily available information, is remarkably sparse.
Thus… my investigation to delve seriously into the subject matter picks up and begins here. There are definite lines of inquiry, which is where we pick it up next time, of what has been done so far.