Home > Blog / Journal > When lightning strikes inside the house! 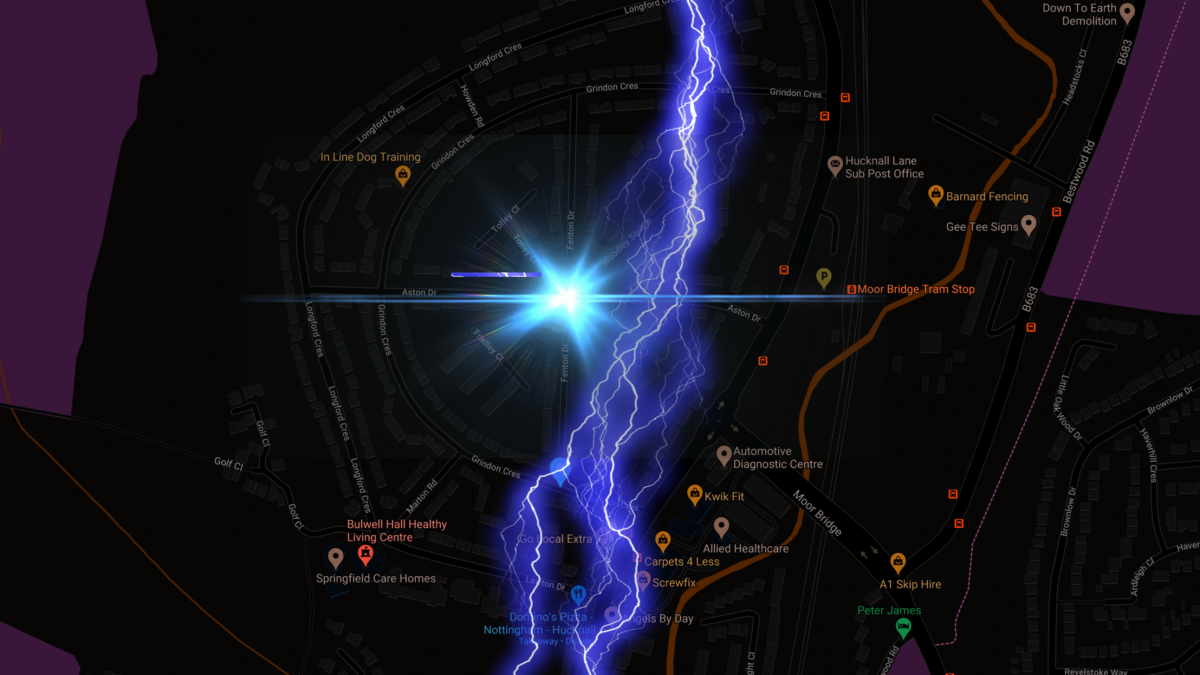 Living on Grindon Crescent, Nottingham. Near highest point on the hill of the arching road. Certainly the home of the clearest view extending over the formed roads of the Bulwell Hall Estate. Have held a long thought possibility of metal within the rise formed due to the odd number of encounters with lightning that occurred at that home and in the garden there. When speaking to people they seem surprised to hear lightning acting in this way. It’s about time I scribe them up and effectively log them publically as being seen. 2 major observations and a few smaller ones.

The floating ball of plasma

An evening where I get up I think to get a drink or visit the toilet as the loo door being opposite the backdoor. It’s late post 9 pm, as I seem to recall watching an evening tv drama. opening the living room door into the kitchen. The kitchen is dark, the only illumination is from the yellow tint of the living room light behind me.

2 kitchen windows are in front of me. Above the sink is a horizontal window approximately 120cms wide and to the left of that half obscured vertically by the tall standing fridge freezer in the corner is a small window about 50cms wide.

Coming from the very right, a basketball-sized moving ball of light that lit up the entire kitchen with blue light creating fast-moving shadows. Casting through the net curtains as it moved to the left with considerable speed. Across one window, then the next. Then suddenly a loud bang! It hit the fence! Outside in the garden, was a tall 6ft fence solid wood panels that surrounded the whole garden as the former tenants owned some large dogs. They were large and wide painted badly either white or black. The particular panel to the left of the garden was black, the paint was deteriorating, flaky to the touch. This panel had been struck and all the flaky paint in a near-perfect circle had disappeared! Just the colouration of the grey-brown panelling of the wood remained in the circle. Whatever slammed into the fence, made it shake in its fitting. Ball lightning? Plasma? I’m not 100% sure that was a stormy night that night, as would always go out to enjoy natures light show. Overcast yes.

The bolt that happened on the night DDP was hit with a diamond cutter by Hollywood Hogan onto the WCW/nWo world title.
Whilst that may seem a random headline, it was indeed that particular night an evening of wrestling action watching WCW Nitro. Which aired in the UK on a Friday night on channel TNT/Turner Classic Movies in the time slot of 9-11pm, Late 1997.

In the living room, is myself, mother Kay and Nico, the black and white cat laying on the wooden coffee table. The table is width-ways in front of the sofa, cat snoozing and the TV beyond. All of a sudden a bolt of lightning shoots through the ceiling, through the table. The cat jumps out of his skin! Though still on the table looks directly at me, in a stunned wide-eyed, communicating the expression of what we were all thinking “What the Fuck just happened!” It was a slim bolt of light, that for a brief moment was entirely from ceiling to floor. Right in front of me, even as I type. I can recall at the time, how when I would blink my eyes the coloured after-image of the light remained. There was a sound of “thhhum” similar to when you cover the end of a vacuum cleaner tube with your hand. The smell of ozone was produced. I went upstairs, mothers room was right above. I went to check for any potential fire, no burns, no chars. Nope, nothing. Have wondered if it came through the living room light fitting, but don’t believe so. From the angle I was at, it much to far across and the lightbulb was turned on. Nor did the bulb blow.

Another anecdotal story can add to these accounts is one where a lighting flash quite literally came through the front room window and out the back window as I stood one step into the living room. Coming past my head within less than 30cm. Bolting past me on my left side. As a young kid, mum would say make sure you open a window in the back and front when there’s a storm. An old wives tale? Seems many of the older folk do so and can remember being told to so.

Memories of my mother: Turves. Her encounter with Mrs Palmer - ghost.